Highline Design is a Graphic Design firm based in Kalispell, Montana. Photographed by Mandy Mohler of Field Guide Designs.

Hi’ya, George! Where are ya from, what do your parents do?

I’m originally from Canton, Ohio. Canton is known for being the third belt hole in the American rust belt. I grew up trying really hard to pretend the downtown park was wilderness. Picture a 10 year old kid in a t-shirt with a lizard or a wolf on it climbing a tree next to stream with a tire in it.  My father worked as an electrician in a steel mill for 30 years and my mother was a public school teacher, she taught science. I like science.

I’m the youngest of my siblings, and I spent a lot of time on my own. While I might have remedial small talk abilities because this, I did spend a lot of time drawing, building, taking things apart, making new things from those parts, and generally just making stuff. My dad could always fix anything, and I think I gained a penchant for problem solving from helping him work on our old house and cars. He also really disliked working in a factory (I think everyone does?) and he frequently told me to work at something I liked to do. That must have sunk in, because off I went to art school where I focused on printmaking, design, and sculpture. After grad school I very randomly accepted a seasonal job as a backcountry ranger in Glacier National Park. Once we found The Flathead we quickly got involved with the community and many of the nonprofits here. In no time we founded this business. Typical story.

What is your favorite part of the design process? I like concepting and researching application and physical production of things. It’s wonderful to make a beautiful design but it’s not worth much if you don’t put it in front of your audience in a memorable way. Designers are communicators. To be effective communicators we have to be problem solvers. Real problems demand creative solutions. Creative solutions are the most rewarding to discover.

What were some of your big accomplishments in 2016?

I learned that having a little kid is not only really funny, but that it doesn’t have to stop a family from having killer adventures.  After a very long process, we rebranded this business in a way that I feel really great about.  I started to get pretty good at climbing again. Climbing has always been a big part of my life. After moving to Montana we eschewed rock climbing and doubled down on backcountry skiing, peak bagging, cycling, and trail running. 2016 turned out to be the year we would take more climbing trips and get back into decent climbing shape. It would also be the year I would stop climbing after tearing my labrum, but that’s another story.

As 2017 begins, what are you looking to for inspiration?

I think we get the most work done when we have so much work we can’t possibly get it all done. 2017 will likely see Highline renovating a new office space. This will add so much extra work that I can’t comprehend how it can happen. Surely I’m not the only one who’s inspired by looking up at a impossible task and going for it anyway. Maybe I just watched Rocky too many times growing up to know any better.

If you could give emerging designers in the Flathead Valley some advice, what would it be?

The Flathead  Valley is an incredible place, but design wise, it can be insular. I think one of our agencies greatest strengths is that we collectively represent a huge spectrum of experiences. If you haven’t yet, try to gain a broad experience. Attend a reputable design program, look at weird art, travel the world, live in the desert, drive across the country a few times, and just keep learning.

There’s this B movie on Netflix called Turbo Kid. It’s not particularly good, but I sat there watching it, and scene after scene I was just giddy over the sound track. It was done by a group called Le Matos. The genre “Synth Wave”, like many trends these days, calls back to the exclamation points of the 80’s. I think it’s really cool, you’ll probably think it’s pretty nerdy.

Fun fact: Nothing calms down our toddler like blasting Le Matos. Molly is her favorite song from the album.

Listen to Molly by Le Matos below.

Lauren! Where’re ya from, what do your parents do*? Southern[...] 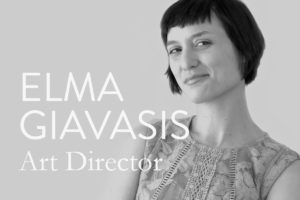